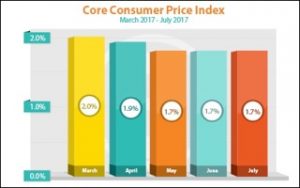 Tensions between the United States and North Korea heightened this week, causing investors to react and move dollars into the less-risky Bond markets. Stock markets plunged as a result.

Meanwhile, inflationary pressures here at home were anything but tense. Wholesale inflation in July was tame. The Producer Price Index (PPI) and Core PPI, which excludes volatile food and energy, both were -0.1 percent in July versus the 0.2 percent expected. Year over year, PPI was 1.9 percent and Core PPI was 1.8 percent.

Likewise on the consumer side, the Consumer Price Index (CPI) and Core CPI, which also excludes food and energy, both rose 0.1 percent in July and 1.7 percent for the 12 months ending in July. The more closely watched Core CPI has been declining since early in 2017 and is below the Fed’s target range of 2 percent.